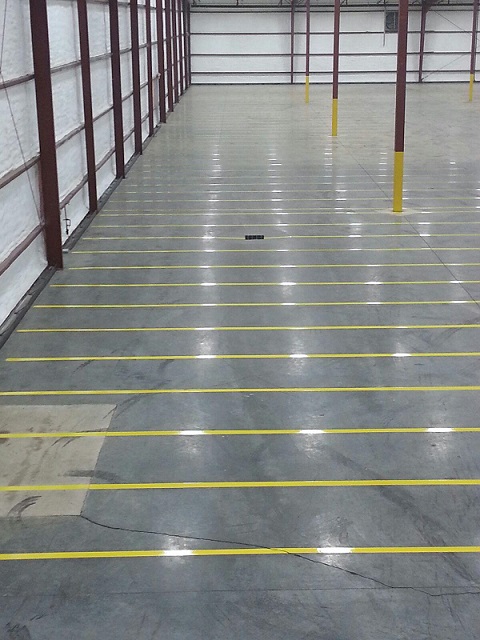 Project Background: Last December, Beck’s Hybrids reached out to us to get pricing for some warehouse striping work at their new facility in Waveland, IN. They have been a customer of ours since 2010 and have used us for interior and exterior striping at some of their other facilities, so we knew what would be expected of us and were able to get pricing to them quickly.  Beck’s Hybrids approved the work in early February and was anxious for us to get started, since they were going to start storing their product in the warehouse soon.  The temperature in the warehouse isn’t regulated, which meant we would be applying paint in the cold.  Because of the low temperature in the warehouse, we would need to use a special type of paint.  We chose a low VOC, single component urethane, designed for low temperature or high humidity applications.

Scope of Work: Our scope of work was to install 5,717 LF of 4″ line inside the warehouse.

Project Details: Several important steps had to be taken in order for us to complete our scope of work. The first step was to layout the 4″ lines based on the customer’s print.  The crew measured out the spacing of the lines and marked them with chalk.  The striping crew then masked all of the lines using a heavy duty tape. Once all of the lines were taped off, the crew used a shot blaster to etch the concrete floor where the lines would be painted.  By etching the floor prior to painting, the concrete’s smooth finish was removed, creating a profile that the paint could successfully adhere to.  Once the etching was complete, it was time to paint.  Finally, the crew pulled up the tape from the floor, leaving crisp and straight yellow painted lines.

Project Duration:  From beginning to end, this warehouse striping took us three full days to complete.  The first day was spent laying out and taping the lines.  The crew finished taping the lines and started etching the concrete on the second day.  Painting and pulling tape was completed on the third and final day.

4″ lines laid out and masked with tape 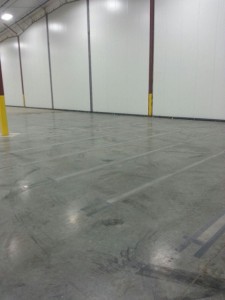 Concrete floor etched with a shot blaster prior to painting 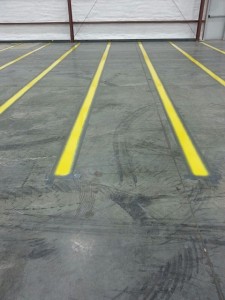 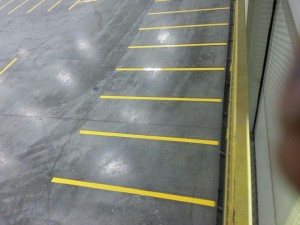 “I had a great experience with everyone involved from Otto’s Parking Marking on this project. From the initial quote, to the planning of the striping, and throughout the striping process itself everyone was very helpful and willing to do exactly what we asked to make the outcome exactly what we wanted. They worked hard with us to come up with a plan to be able to get the striping done even though the temperatures were close to being too low. The striping crew was very easy to work with and did great work while making sure there was no overspray. Overall, Otto maintains good quality work at a very fair price.”

Call the office to talk to an estimator or use our convenient form to request a service estimate online.